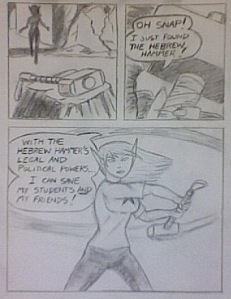 My principal tells me that not all problems need "the hammer."

I couldn’t sleep last night, so I drew the above piece. I’m actually quite happy with it. A friend and I are going to be collaborating on a comic length project, and I really need to refine my backgrounds and fighting postures…this really begins to set a standard.

In fact, being Jewish, I often call it the Hebrew Hammer.

Hence, the above artwork.

Conversations about “the Hammer” have happened between myself and the principal since the early days of school. Today, we have a School Site Council Meeting where certain budget adjustments simply have to be put through, before financial freezes begin. A good number of them are truly vital to operation.

After that, I’m going to a meeting of concerned teachers, about the Reed Case. I’ve mentioned it before…that’s the case that the ACLU won a few years ago, that stated the “reverse order of seniority” layoffs endorsed by the Union are in fact a civil rights violation, that discriminates against my students unfairly. The reasoning is that newer teachers tend to be in inner city schools, and that the layoffs of newer teachers caused a level of instability and turnover at those schools that is completely unacceptable, and doesn’t happen at affluent white schools.

The Union appealed this decision, and lost.

They are in the second appeal now. I’ve been working with attorneys on an amicus brief to support the Reed Case, and protect my students from turnover. As a side effect, it would also protect the talented young staff at my school, that I have come to respect (unlike my old school). Unfortunately, most teachers won’t sign that brief, now called Brief A, because they fear Union retaliation.

So tonight, a large number of teachers are being brought together about Brief B, which is shorter, and more “teacher friendly.” It still aggressively supports the Reed Decision, arguing that it is, in fact quite discriminatory to my students.

I will be submitting my statement, and giving a brief “call to action” speech, to incite the educators present to sign the brief, and make things happen. I intend to speak about our responsibility to step up for our students, to take risks in order to see that they are successful. That’s the job to a large degree.

All the time we tell our students to stand up for what’s right, to think for themselves, and be a leader, not a follower. If we aren’t going to be hypocrites, we have to be willing to do it ourselves…no matter the source of the wrong. In this case, sadly, it is our own Union, who is representing tenured teachers over newer ones, and both in favor of students.

Thor’s hammer, in comics, says on the side, “Whosoever holds this hammer, if he be worthy, shall have the power of THOR.”

Tonight, I have to be worthy.

3 thoughts on “Tonight’s Meeting, the Reed Case, and Worthiness”