Dare you enter…The House of Literacy?

Or perhaps “Tomb of Skankula” is more spot on?

The failure to deploy the iPads really delayed me getting into Edgar Allan Poe this year. The goal was to get iPads in the hands of kids, download the complete works of Poe from Project Gutenburg, and begin projects based on his various disturbing horror stories. Typically, Poe is where I get the students on board with reading. “Tell Tale Heart,” “Black Cat,” and “Hop-Frog,” are so brief yet horrible, so in touch with the evolving mind of the tween, that they are pure gold in terms of motivation.

For the past two weeks, I have been scaring the bejeezus out of my students with these works of 19th century literature, only to be met with eager requests for more of the same. For an English Teacher, there is little more satisfying.

This week, then, we isolated the ideas that drive the genre of horror, the aspects and features that make a horror story such a thing. The generally first person narration, the unreliable protagonist, the limited point of view, the veneer of the supernatural and/or unexplained. The general satisfaction provided by a twist ending.

Then, after codifying them, we made a “word wall.” I hate word walls. This word wall, however, was about ideas for settings, ideas for conflicts, and so forth. A Wall of Ideas.

Students then put together a plot outline, that they had to pitch. We had in depth plot discussions for a day, as the ideas were hammered out. Now, we are in drafting, and normally, when students complain about paragraphs, I am getting multi page epics from twelve year olds.

Hence the art above. I wanted to do something that referenced the old horror comics that I loved, like Werewolf by Night, Tomb of Dracula, and House of Secrets. I also wanted to reuse Nosferatu Lady, who was pretty popular. I went back to some “Midnight Sons” covers from the 90’s, and decided those covers sucked. Tomb of Dracula was going to be the score, but I wanted to set it later, because an off hand crack I made in the prior post let e-mailers to question whether Nosferatu Lady was the protagonist’s college girlfriend. I kid you not.

So to set it in the early 90’s, I went with the generic X-Men uniforms designed by Jim lee. A piece ages ago (like two summers) suggested that our hero went to Xavier’s School at some time, for a while, because she was wearing a sweater form it. It’s “Gifted Youngsters,” not “mutants only,” so it is possible that she could have been admitted, but it needed to be one hell of an application.

Because I was still doing Breakfast in the classroom, though, I could not resist another werewolf. I told my students that I thought lunch ladies might be werewolves, and they universally agreed. 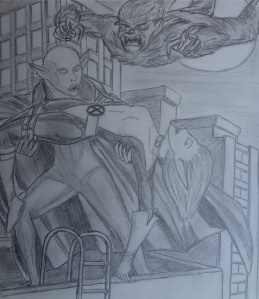 Also this week, students from the leadership class came by to ask if I wanted to be involved in the school’s “Haunted House” activity. This resulted in about five minutes of schtick, because the young man who was their leader pronounced it, “hunted.”

Me: “Where will it be hiding?”

Me: “Where will the house be hiding? In the forest?”

Me: “Then why do you need to hunt for it if you know where it is?”

This schtick was bewildering to the students, because he could not, for the life of him, hear the difference between “haunt” and “hunt.” Like many Californians with “pin” and “pen” or “Erin” and “Aaron.” Makes me crazy.

When I said, “Oh…you mean you want me to scare kids,” the student was relieved. when I said, “I do that every day,” my class thought that was the funniest thing ever.

Needless to say, I will be participating. That, however, prompted bonus art, inspired in part by the fact that I got a young Hellboy story about an evil circus this week. YAY, Hellboy!

Those are skeleton chimp clowns. Just pointing that out.

Everybody is all about zombies these days, but skeletons….pretty creepy. No reason to move or hold together, but they do. Stabbing…useless against them. only broken bone injuries could possibly matter.

Didn’t think about that, did you?

Again with the pencils.

This week will see me scaring young people for fun and profit. Apparently the “Haunted House” or “Haunting” as I call it (there’s no house, you see) will be in the school’s basement. That basement looks just like the Hellmouth from Buffy. Just like it. All the proceeds go to National Junior Honor Society…so that’s a good thing.