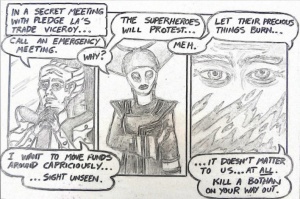 Not much my commentary can do here….

The word on the street is that Pledge LA met with their principal, who has been appointed by the superintendent but NOT released from his current position. The point of that meeting was to go over finances for OUR school, which he has not yet actually set foot on as an employee. A budget issue exists that they would like resolved, and they in fact would like Tool Site Council to hold an Emergency Meeting to make it happen.

Not going to happen.

If the principal were on campus, employed, and involved in the day to day operations…maybe. Could happen. In this case, Pledge LA is nowhere near our campus, avoiding it like some sort of leper colony, and the new principal, a clear Politics Darth, has possibly shown up to be interviewed, if at all. The fact is, neither party knows the financial realities of the school.

The discrepancy was simple…an admin position was preserved, in order to have an additional administrator present. Technically, many of the responsibilities of that administrator could be served by our PSA Counselor. There were legit reasons for maintaining the two positions, mostly related to maintaining high standards of attendance and data tracking for our students.

The administrator who is in jeopardy by this need to trim the fat did not endear himself to staff the other day. He basically chose to start doing a portion of his job all at once, since he had been called out on it, and this became everyone else’s problem. Not the best plan when Pledge LA and a Darth want to have an Emergency Meeting to downsize you personally.

The fact is…neither Pledge LA, or non Employees, call meetings. Not at our school. That in itself seems to be a bit of a wake up call to the @#$ clowns involved. The point of Tool Site Council is to make “boots on the ground” decisions about finances that are directed to benefit students. The point is NOT to follow the directives of outside parties who may or may not have that as their first interests, and are certainly not “boots on the ground” during active shooter situations, or standardized testing.