Dan was beyond friendly, and fully understood the siren call of Mexican food.

On Day Two of Guest Artist Week, I find myself thinking of what my students were saying at Breakfast in the Classroom. “Where have the burritos been?” I hadn’t said anything, because I thought it was my obsession being transferred…but no. Others have noticed the conspicuous absence. To fill the void, I had Taco Bell’s Waffle Tacos the other day…and they were good.

How could they be otherwise?

So, at Wondercon, my friend Vince brought me over to meet Dan Smith over in Artist’s Alley. Artist/Writer Dan “Smif” Smith has created an epic story based on the Revelation of St. John. That’s what his book, Armageddon: Hell, is all about. Usually, that would not be my cup of tea at all, but meeting Dan, and talking about his craft…he was a pretty nice, interesting, cool guy. His style is both whimsical and unique, and watching him work was instructive. The move from pencil to marker was fascinating to watch in two distinct stages. Dan’s work includes comics, board, card and role-playing games.

From Dan’s own book, Armageddon: Hell. A more brooding, horror feel, showing his versatility as an artist. 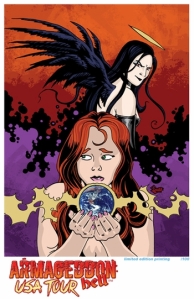 Dan was really friendly. Seriously, he was super approachable, and only too happy to talk about his projects and his craft. With a good sense of humor, and an incredibly fast hand at drawing, I’m amazed that we don’t see more of his work in mainstream comics. We are of course proud to put a permalink for his own comic to your right (you might need to scroll a bit).

Below is the filtered version of Dan’s contribution. Certainly check out his web site, and drop him a line, True Believers! 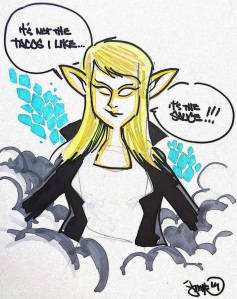 Almost certainly to be an article of my clothing.

One of the things that I liked best was that even thought he referenced the “Black Jacket” uniform in his art…Dan saw through to the positive material that Adequacy is usually about. And of course, he saw directly the love of Mexican, Tortilla based foods.