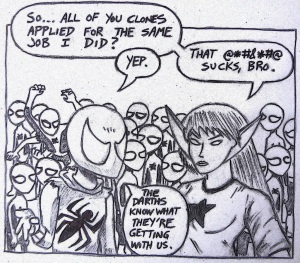 When we went to the job interview earlier in the week, we saw all sorts of interesting people. By “interesting people” I mean the same person over and over gain, with subtle variations. Heck…have you ever made a copy of a copy, and seen the quality degrade? I’ve seen it in PEOPLE.

When we came in, we were stacked with a Roman shield made by a student, various student presentations, a multimedia video of every cool even we have ever run, and i had a functioning robot at my disposal, as well as a stack of business letter written by kids. We were dressed nicely, but I was the only person going with straight up formal wear, as opposed to “business attire.”

In the same room, there were several older ladies in “business attire” armed with manila folders that featured their resumes. There were some cultural variances, but it was exactly as if someone set up the genetic cloner, and said things like, “Can we run off a copy of white female teacher number three?” Voila! Suddenly, a job candidate appears.

The interview went well…very well. For a time, they tried to discourage us by saying that they had an “energetic African American population.” We replied that we had done our entire careers in South Central, and in fact preferred that demographic, as it is the demographic we have consistently chosen to teach. My counter question was this…”How many fights have you had on campus?”

I laughed a bit. “Today we had seven on our campus. And it was a short day. Don’t start me talking about drive bys and lockdowns…”

That set a tone. A tone that the clones they were seeing might have the resume, and talk the talk a bit. We were two teachers of the year from challenging schools…schools that have never had an API as high as their LOW POINT. Sigh.

Depressingly, at the end, they really, really liked us. Depressing, because they didn’t actually have the history opening that they were interviewing for, rendering my co-teacher unhirable in the short term. I was visibly upset and cranky about this, and there was an effort to console me.

The art, of course, is a shot at this process, and a shot at the Clone Saga of marvel Comics’ Spider-Man in the 90’s. Two birds with one spider shaped stone, True Believers…