A Le-matya Is A Better Mascot…

This makes me happy.

Today is the second day of Rosh Hashanah, and I am taking it off. Normally I don’t, but in the wake of everything going wrong at school…it felt like I should take a day to reflect on things. A day to reflect on the very idea that continuing to work there, and not “making waves” is tacitly endorsing things that I might not actually be on board with. Although there is a plan in place to fix things, at this point, I have to question whether the plan was too conservative, and things have gone too far.

Thankfully, that day of reflection is also a day of much needed rest. Our protagonist needs it as much as I do. In the past, I had cats…for many years in fact. Thinking about the past, and things that comfort me, got me in the mindset of my cats, and old Star Trek episodes. Both have been a source of serious comfort, and amidst change, that comfort is needed.

Most people don’t realize that there was actually a Star Trek Animated Series. The Animated Series had the advantage of being able to do things that effects in the time period couldn’t. The Animated Series entitled “Yesteryear” brings the viewer to Vulcan, in Spock’s past, via time travel. In the episode, Young Spock encountered and was nearly killed by a Le-matya, while undergoing his kahs-wan ordeal. Spock was fortunately saved by his pet sehlat, I-Chaya, and his cousin, Selek, who was able to incapacitate the Le-matya with a Vulcan nerve pinch. Unfortunately, I-Chaya was injured by the Le-matya’s claws and eventually succumbed to the poison.

The Le-matya was a large predatory beast, bearing poisonous claws, native to the planet Vulcan. Le-matyas were known to live in the foothills of the L-langon Mountains along Vulcan’s Forge.

The Le-matya, as depicted in the Animated Episode, “Yesteryear.” 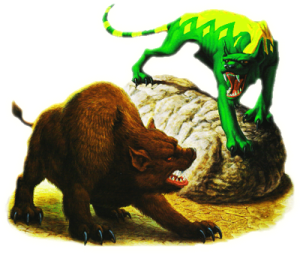 The Le-matya and the bear like Sehlat, which would have been Spock’s pet. Source unknown.

The whole episode is about Spock getting through his Vulcan Bar Mitzvah…so on Rosh Hashanah, it kind of speaks to me a bit. obviously, I made the Le-matya more friendly and pet like, more Disney/family friendly. I like it better than the Sehlat, as a concept.

Still…the point is that I need to get some rest. To be apart from the Armageddon-like environment of school, and enjoy the better things in life for a moment. To reflect on what I need to do, so that I can do it. Harder than one might think.

The cutout that made the above mixed media possible.

I have not been sleeping well. I think that’s a big part of why I wanted to draw our hero at peace, sleeping soundly. At least one of us should be getting some rest, right? When I drew this, I had in mind the speech, the presentation that I made to my students about writing fiction this week. The idea that when the blank page is in front of you…you have no limits. Total freedom. You’re the Creator, the one in charge. If I want to introduce a pet Le-matya…then fine, there’s a Le-matya. If I want our hero to sleep soundly, like she did when she was a girl…no problem.

The blank page is the one place where we have total freedom. Imagination is the only limit. Too infrequently, teaching is about limits…both on students, and on educators. About what you can’t do, not the possibilities. 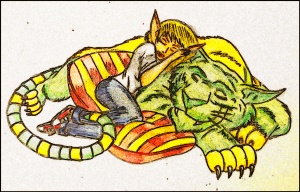 The colors in this earlier version are more vibrant, so I included it.

This is a bit of a rambly post, but I am unapologetic. Mostly because I’m reflecting, stream of consciousness style, on what I do like about teaching. On the things I seek to inspire, to shape, to motivate. I’m dreaming while awake, of the way my school could be if the Darths were serious, if everyone did their jobs, and I had time to teach English. If I could stop being a policeman, a therapist, and a parent, and instead be the expert in language, in narrative….the person I was hired to be. I would like to stop being the person that held others accountable, to stop being controversial, and simply teach.

At our last after school meeting, Darth sat next to me, on purpose. I spoke to him, as directed by the training, about my lesson plans, about the structure of empowering kids through writing. It was a startlingly human conversation, and as I left school with my teacher, I expressed that. There is a part of him that wants to support the same things I do. As Rhoman Dey says, “I don’t think anyone’s one hundred percent dick.”

Maybe. Maybe not. All I know is that when I personally break up five lunchtime fights, and can’t find supervision staff for support…I have to question our purpose. Because I wasn’t hired to be a referee, or a police. 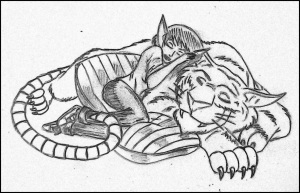 The inked version, no color.

I worry about what school will go like in my absence. I also have to think intelligently. Some day, for one reason or another, I won’t be coming in. Students will, however, and they still need to succeed. Somehow, I need to act now to set in place the systems that will make that happen, and outlive me.

Heady topics, as I look around for my Le-Matya.