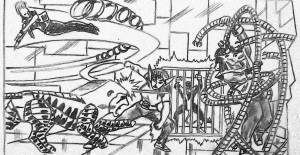 The Danger Room, where the X-men train. Pasadena was less interesting.

Saturday saw my co-teacher and I at a GATE training in Pasadena. Subtitled, “Ask the Experts,” it was pretty interesting, despite my lack of motivation these days. The keynote speaker had interesting remarks about the very idea of being “gifted.” he spoke at length about the transient nature of the label, that a student can be labeled as “gifted” at one point…but later on, the “gifts might wear off.” He spoke more to the importance of access, of equity, of the ability to get all students into high level classes.

Most importantly, he spoke to the importance of nurture on a student’s attributes. He felt that the influence of parents in that sense was truly vital, that parents who engaged their children intellectually, as real virtue. Interestingly, he cited the effort that Americans go to scout new athletic talent, and contrasted that to the effort put into finding new doctors or engineers. It was depressing, to an extent, to have that focus put sharply present.

Still…listening to a neurology expert speak to the interconnectedness of disciplines, and the activity of the brain when solving high level problems was wonderful. It was an intellectual exercise for myself, one that my job, as of late, has had all too little of. Speakers spoke against the validity of scripted lessons, and instead supported the use of data to construct new, heavily custom tailored material. This, of course, was in the face of me being given, at almost the same time, orders to enact a scripted lesson plan with 100 percent fidelity. Still, it was an opportunity to reconnect with the purpose of being a teacher, on some level.

The art, I drew afterward. I had some debate about the content, but felt that the X-Men’s Danger Room, with our hero and Horsey, was a good way to go. The Danger Room is a way of learning things by challenging the students. Granted, the Professor Xavier Method of instruction involves a holodeck and some sort of giant robots, often jungle gym’s and missiles. It does certainly challenge the student to a new level of performance. Still, the Pasadena conference was more lecture and Powerpoint based, which was fine. The art was still fun.

I drew this while there, and thinking about Star Wars Rebels, which I haven’t watched yet: 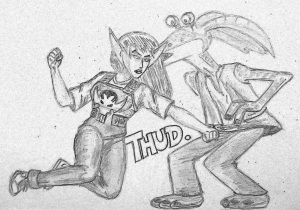 George claimed that he was there as a viewpoint character for children, since the Star Wars movies, to him, are essentially children’s films. I liked Star wars just fine in the seventies, with R2-D2 providing most of the “cute factor.” Jay Leno spent WEEKS using Jar Jar Binks as a mainstream punchline.

In terms of plot, it is important to note that Jar Jar is directly responsible for the rise of the Evil Empire. In “Attack of the Clones” he responds on the Senate floor to bait by Palpatine for “anyone brave enough to make this motion.” The motion in question is that Palpatine be granted emergency powers, which he then used to raise a Grand Army of the Republic to start the Clone Wars and later become the Imperial Stormtroopers. Without that motion, no emergency powers, no Evil Empire.

For at least fifteen years, Jar Jar has made me wince when I think of new Star Wars projects. I haven’t looked at Rebels yet, in part because I don’t want something I liked that much to wind up with Jar Jar, or something similar, on it, or in it. The art is about that, to a large degree. There was so much expectation wrapped up in Phantom Menace, and such a letdown, that I just am having trouble accepting Disney’s first outing at the helm of the license.

Also…Jar Jar makes things look bad for all Alien Americans. The protagonist can’t get behind the alien stereotypes that Jar Jar perpetuates.