A mildly cropped version of the lead art for New Year’s Eve.

Another calendar year in the hopper. Sadly, we won’t be able to just outright deny the year, as the header suggests.

I have to say that our hero, above, echoes my feelings toward it. I’m glad to be stiff arming 2014 into the past where it belongs. The year has had more than a little bit of adversity, especially in the workplace. I’ve made no secret of not particularly wanting to be at my current assignment, and the year has seen that assignment descend into chaos. For the first time in ages, I actually dislike going in to work, which is at odds with my basic mentality.

Still…for the time that I occupy that posting, my team and I will do the job as well as possible. That’s what you sign up for. The students shouldn’t get a lower quality education, or lesser quality from us, because of “adult issues.” My co-teacher and I have taken a different view than we had the past few years, related to this. In order to revitalize ourselves, we are refocusing our efforts on having activities and events for excellent students that are both educational and rewarding. Also, events that need absolutely no support from Above Our Pay Grade…

…because we just haven’t seen it. Instead, we think it is smarter to go autonomous, and to simply embed the “events” in the instructional day as a portion of unit planning. You know…our jobs.

The successful “Hobbitpalooza” event at the end of the semester, in the final week in fact, was serious in cementing this idea for me. It made it far more palatable to show in for what ultimately is discouraging, when you could visibly see the impact that your efforts have on students. I had kids treating the novel like a Textbook, looking things up and translating a map in Dwarf Runes for the privilege of solving math problems before the other teams. That kind of thing just doesn’t happen easily.

Still…that’s not the only thing that I’m glad to see in the past. My favorite comic book store closed, and that is a drama that I am only too glad to see behind me. Sure…one of my oldest friends has retired to an excellent life. Still…as I’ve said before, that was the Clubhouse, and it’s pretty @#$%ing hard to replace.

Comics themselves have been pretty disappointing as well. In the last year, there has been very little that has jumped out from the racks and said “awesome!” at the top of its lungs. Grant Morrison’s “Multiversity” has been largely good, and there have been a few single issues here and there that I can speak highly of, but overall…there’s been a creative doldrum in comics for some time. I don’t exactly have an idea of what would fix it, per se, but it is telling that many of the more solid offerings come from smaller publishers, like Image or IDW.

So yeah…I’m looking forward to elbowing Old Man 2014 and taking his stuff, like our beloved Protagonist. To be honest, right now I don’t have too much positive to think about 2015, except for returning to being outspoken. For the past semester, I’ve kept my mouth shut about a lot of things that cheese me off, both at work and outside of it. I did so for the “greater good” and all sorts of other appealing sounding reasons like that…but it stresses me out. You can be strident and outspoken without being a loon…Silver Age Superman does it quiet well.

Although, a Klingon model of democracy seems cleverer to me right now, having dealt with the Union and the Darths. (Hey! Klingons in the strip on Friday, Readers!) 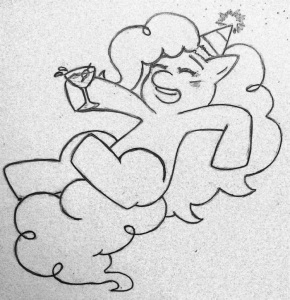 This Pony is ecstatic that the year is done.

Right? The pony above is on to something. Sometimes you have to just remember what ol’ Jack Burton always says at a time like that: “Have ya paid your dues, Jack?”

“Yessir, the check is in the mail.”

When you’ve paid your dues, and done your best to do the right thing, and know that you are going to in the future, the rest can kind of wash off. You can relax a bit, sit back and have a refreshing adult beverage with an olive in it, knowing that you work hard at the things that matter.

Normally, I’m a lot more negative this time of year, rehashing failures of judgement, failures to stand up and be counted when the @#$% has hit the fan. The fact is, this year I have stood up and taken my licks, and given them out handily, over the Right Thing. Friends and enemies have both taken the time to metaphorically, and in at least one case literally stab me in the back. Still, I managed to walk it all off, and at the end of the day, heck the end of the year, treat it like I do a plane flight.

Just walk away, preferably with an adult beverage.

Again, I’m put in the mind of Jack Burton about this. He said, quite famously, “Just remember what ol’ Jack Burton does when the earth quakes, and the poison arrows fall from the sky, and the pillars of Heaven shake. Yeah, Jack Burton just looks that big ol’ storm right square in the eye and he says, “Give me your best shot, pal. I can take it.”

Now, let’s be fair…I don’t WANT to take it. I’d love it if I could have the same life as other teachers, and just go in, have a pleasant day with pleasant kids and pleasant bosses, and go home. I don’t teach in Riverdale though, and sometimes I wonder at the decisions made above me. I’m on vacation now though, so I’m wondering less. Much less.

There is one major achievement that I’m incredibly proud of, however. This is the conclusion of the third YEAR of Tales of Adequacy. We are approaching post number one thousand in less than fifty issues. My process and craft have tangibly improved, and I’ve gained a kind of consistency that I’m happy with. Thursday, January 1st, will be our Fourth Anniversary as a Web Comic, Blog, or whatever.

That’s huge to me. There are days when drawing for Adequacy is the best part of my day. There are random times that it comes up that I am bewilderingly proud of it. I look at earlier art, that I thought was great…and I’m not ashamed. Instead, I have a real portfolio of growth that i can look at and point to. It’s crazy…

That’s what “portfolio assessment” in education is about. The idea is you collect, together, over a large span of time, a single student’s work. Then, at regular intervals, you go back through the portfolio, to demonstrate the growth of the student’s product over time, and work with them to discover avenues that need to improve. It is not immediate, like standardized testing is supposed to be, but it does have real meaning to the student.

I can say that for certain, looking at Adequacy as my own portfolio. I’m still very proud of the early works, even though many have flaws and problems that I can avoid now. It’s like a giant, electronic monument to the value of Practice.

With such a milestone, and the fact that I’ve been making cover art digitally, I felt that I should do something about the big anniversary issue.

Oooh. The cast looks fancy in Disney Style Dresses and even Pony has a tie. It even says “Extra Fancy!”

I wish that I could say that I had plans for the direction of Adequacy, but I don’t. That’s just not how the strip is generated. Things happen to me, or around me, and I draw about it…as an outlet. As a positive expression, through humor and the pencil…when sometimes everything around me is negative. I’ve had some real comics industry people talk to me about maybe doing a project in the future, which is awesome…and daunting.

Sometimes, I LIKE being a person who just has a web comic for no real reason. No deadlines, no industry criticism that matters. I think that was the appeal of self publishing to Dave Sim, even though he did sort of go off the rails mentally in a very public fashion. It was his living after all…thus kind of making my point.

Still…as proud of it as I am, Adequacy isn’t going anywhere for the forseeable future. That is to say, I envision myself continuing to draw the project, not that it’s going to be stagnant.

Without the logos. The protagonist clearly dislikes that dress.

Adequacy started as a result of a New Year’s Resolution of sorts. I had been filling sketchbooks with directionless sketch practice that I was doing inconsistently for years. I had around thirty of the early Adequacies drawn, and no “big project” for the year. My co-teacher and I were settling in at a new school, basically moving into our second semester, and things were…good. The relatively positive tone of the early strip is founded in that.

For four years, I haven’t bother to give the protagonist of the strip a name. It’s kind of willful now, but honestly, I don’t even think of her with any kind of name. Occasionally in the strip she’s referred to as “Boss” or “Cap”, but there’s no rhyme or reason to it. It’s rare that a day goes by without me drawing her doing something.

Oddly, I’m fairly certain that the art above is only the second time she’s ever worn a dress. Both times, they were Disney style dresses. Both times, it was for a milestone issue of the book, of course. I mean, even though her Skrull head logo is a brooch on the dress, it would be hard to hand out super @#$ kickings wearing that.

Still, it makes me feel like I stick to things, including the oft abandoned New Year’s Resolutions. I used to rollerblade a lot…I mean a lot…in college and grad school. I could use some additional cardio in my life, and cardio at the gym is boring. I’m thinking I’m going to get myself a new pair of skates, and make sure that I get in some cardio on a day to day basis.

If that works out as well as Adequacy did, I’m sure to be fit as a fiddle for the next four years.