From A Certain Point of View… 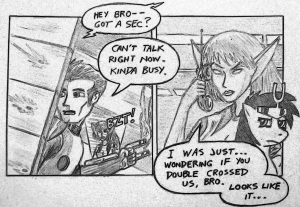 I started off with the idea of a headset style communicator for panel two. Except I hate those.

I should post more often about wanting to leave the profession. The hits were huge for the site, and for that, I thank you. The comments and feedback were also a big deal, on a day that was Epic Level Crummy. I spent a bunch of it trying to cut deals for letters of recommendation, and trying to locate the few people in positions to hire someone like me that I haven’t crossed by being inflammatory and confrontational. Amidst that, I tried to keep in mind a dear friend’s tarot card driven advice of “it might be time to do something different.”

Today is today, though. Not tomorrow, and not yesterday. In Today…most of my team has broken up. That process of disintegration began about eighteen months ago, but has accelerated quickly. People who fought to stay at the school during the reorganization that brought me in are leaving, and in fact leaving in large volume. It’s a whole lot like watching the contracts for a good baseball team expire under poor management…the players market their talents separately, instead of as a whole.

The way that I operate…it doesn’t make a lot of friends that you can fall back on when things go south. I’m like the player that argues with the umpires, the pitcher that is good but doesn’t take advice. You like to be a fan, you respect their practice, their art if you will…but when it comes time to hire that player, you think twice. along the way, with some of the few people that I haven’t alienated, I’ve turned down a couple of exits…which are now closed.

The art, of course, has something to do with that. As I drew it, I wondered a whole lot of things about the Beatles. Mostly about the end of the Beatles. Did Yoko Ono know that she was breaking up the band? Did she feel the least bit bad about it? As the Beatles were dissolving, did Paul wonder about the future, and the stability of it? It’s not like Paul was really part of the choice….the band just dissolved. Something that worked became something that didn’t…and wouldn’t again.

Granted, Paul McCartney was smart, and sold his intellectual properties for what they were worth, being one of the @#$%ing Beatles. He is worth so much money now, that if he were to get mugged for $652,783, he would just shrug and buy a Bentley to feel better. Education doesn’t allow you those kinds of lucrative opportunities, but the fact of the matter is, I have been on hand for real change, for real political action in my field. I should be able to parley that into my version of “Wings,” at the least.

I don’t know if the Beatles were mad at Yoko. I was mad at Yoko, but that’s a side issue. Heck, I’m still mad at Yoko. I’m certainly mad at the Yoko Ono’s in my life, and to be fair, I think I will be for some time.

It begs the important philosophical and metaphorical question…what, if anything, could Yoko have done to make it right, the breaking up of the Beatles. Forget the loss to music, the friendships that were broken up as a result of those actions, the things that couldn’t be made right or taken back. Those things are huge, and aside from the lack of more Beatles cuts, the fact that those things were never resolved, were never set aside…it’s huge. It might be the more foul thing that I blame Yoko for.

Stan Lee and Jack Kirby had creative differences, and never really resolved them. They could get through a workday, and were okay, I think…but they weren’t the buddies, the creative force that made almost everything that we see as Marvel today. Does John Romita Sr. ever feel bad for drawing the book that catalyzed that? I know Stan doesn’t feel great about that…but Stan was always the more practical and moderate portion of the partnership.

These were the things on my mind as I drew the art, which actually pushed back another composition. They are important metaphors, drawn from sports, music, and comics. Sadly, none of my heroes have any consolation for me.

I still am no fan of Yoko Ono. Both realistically and metaphorically.