Waiting For The Great Pumpkin. 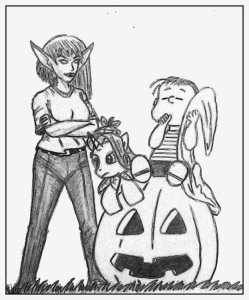 Linus is much more patient than Halloween Time Pony.

Today will be Halloween at my school. I suppose that it is Halloween everyplace, but the current reality of public Education confines my ideas to the school.

This year, there are a whole lot of guidelines for costumes, should students or staff choose to wear them. Clowns, of course, are completely outlawed. So are masks of any kind, face paint of any kind, and any outfit that might offend someone in ant way based on the Board Resolutions for Respectful Conduct. In short…there really aren’t all that many costumes that can be worn at all. Regardless of the limitations, the idea of costumes has not been prohibited, so in theory, a student or staff member can come dressed in a way that is “fun” for the purposes of the day.

I pretty much threw in the towel on it this year. I feel like my School Spirit, as it were, was expressed enough on Movie Night, and staying close to midnight on Friday night for the Homecoming Game and Dance. Not wishing to put in too much effort on it, I’ll be going to school dressed more or less as usual, but bringing Halloween Time Pony instead of my usual pony. So…there is that, at least.

This set of “prohibitions and restrictions” isn’t that unusual this year. Tufts University had a similar set of unacceptable costumes in a letter sent to the students that I heard news of on the radio, earlier this week. It is an earmark of the world we live in, I think.

I’m not that big a fan of Halloween myself. No matter what, I’ll be losing a day of productivity today, either from absence, costumes, or the idea of parties and such after the school day. unfortunately, it is my last day before Mock Trial…although I conceded the day as a final preparation day in the theory that Halloween at school isn’t going to be that productive of a day anyway.

For those that don’t know the “Peanuts” reference that I’m making above, here is the “short form.” Linus is the only character to sincerely believe in the existence of the Great Pumpkin, and it’s a very strongly held belief of his. Linus’ vision is actually the result of a confusion of Santa Claus and the commercialization of Christmas with the Halloween holiday. While the other Peanuts characters go trick-or-treating on the holiday, Linus spends his time in a nearby “sincere” pumpkin patch, hoping for the Great Pumpkin’s arrival with presents for Halloween.

This seemed pretty in line with the kind of Halloween at school that will probably happen. There’s no doubt that it will, in fact, be October 31st. Besides that basic premise, it seems that this year much of the ordinary business of Halloween at a school site, in terms of Spirit activities and so forth, won’t happen, in favor of some kind of lonely but very sincere vigil.

I’ve always liked Linus, which is why Cap, at least is smiling. Halloween Time Pony seems confused, or nervous, which probably is more expressive of my underlying feelings for the school day.