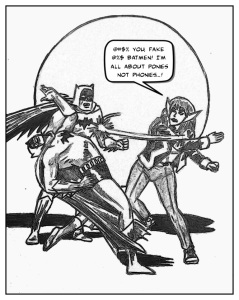 Whoa! That, True Believers, is a Slap Supreme!

Seriously, few Batmen could endure such a Mega Slap. Cap has Silver Age Alien American strength, the kind you use to lift mountains, bust up meteors and asteroids, and put moons back together. A FEW Batmen might be able to take that kind of thing on the chin, and roll with it…the Batman of Zur-En-Arh, or the Batman from “Elseworlds: Speeding Bullets,” to name a couple. The mast majority of Batmen, however, would be in very serious trouble.

This then, is a post about Batman. I have a Long Weekend, and this seemed appropriate.

I was reading some of the new “Silver Age World’s Finest” omnibus the other day. For those unfamiliar with it, it reprints a comic called “World’s Finest”, which for decades was a team up comic featuring Batman and Superman. Every month, Batman and Superman were teamed up, to solve a Serious Super Problem. Robin often tagged along, and the two heroes were Best Friends.

It is a far, far cry from the modern, post Frank Miller world of comics, where Batman and Superman practically hate each other. Where despite not actually having super powers of any kind, Batman is @#$%ing unbeatable, even by Superman. In those older stories, Batman isn’t this intense, grim individual, where we have to hear about his tragic origins once an issue. Instead, Batman actually smiles a whole lot, is concerned about his relationships with Robin and Superman, and even takes care to not mess up his life as Bruce Wayne.

Somewhere along the line, in an effort to make Batman “realistic”, the books stopped being any fun, or very enjoyable to read.

I also want to put out this idea: a “realistic” Batman is the key vogue now…the elements of the Silver Age are completely passe. We are narratively concerned, as a fan base, with a “realistic” story about a billionaire who dresses up like a bat at night in order to avenge his parents deaths, and spends huge amounts of his vast wealth on personalized equipment to do so. Where is the reality in that at all?

I feel like the Scott Snyder Batman run was over rated, because it didn’t recognize that, where the “Batman Incorporated” run was brilliant, for re-injecting the wildness of the Silver Age, with modern sensibilities. I started reading Tom King’s “Batman” comic with the first “Rebirth” arc, and it split the difference nicely as well…except that the book was then interrupted by a cross over, and I lost interest. I think that was an editorial blunder, guys.

“Justice League: Power Rangers” puts an excellent voice to my criticism. The Blue Ranger sees Batman…an unkind, unsmiling man dressed in black and generally being angry, and just assumes that he has to be a bad guy. This starts the general misunderstanding that makes superheroes (and superhero teams) fight when they first meet. Even when it is all sorted out, the Blue Ranger insists that he had no way to know that Batman was a good guy, while Batman threatens to take his Dinozord and put it in the cave as a trophy.

Batman is one of the most heavily rewritten, most often used in Elseworlds characters that DC has. With the addition of reprints…I don’t HAVE to accept the current Bat-vogue at all. It is entirely possible to sustain a diet of new material with Batman ’66, and consume reprints that I have never read before. In truth….I don’t have to accept the shoddy substitute for a good Batman that I currently am getting.

Heck…even in merchandising, that’s true. I actually have a Silver Age Orange Batman, because DC has marketed to that specific, tiny demographic.

Still…the vast majority of the market consumes the “gritty, realistic” Batman hand over fist. We get variation after variation of the tired trope. That’s what Cap is so angry about, and doling out her Slap Supreme over.

Artistically, I wanted a silver Age feel, with an implied background. You’ll note that there isn’t a ground, so much as shadows on the ground, giving the feeling of background and dimension. I’m working a whole lot more on shadows, because they are important to a feel of depth.

Maybe the writers of Batman over at DC can work on a “feeling of depth” as well.