All Hooves On Deck! 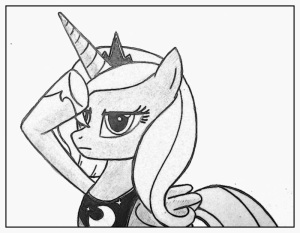 School Time Pony is also in the home stretch of the year.

As readers may (or may not) know, last year at Grad Night (at Disneyland), I made a pony at Build-A-Bear Workshop to haul around all year. That pony has seen some rough living…constantly schlepped to school events with me, hauled around from class to class, meeting to meeting. It has been in one major car accident, and has been around for all sorts of more minor catastrophes.

Last week, on Spring Break, School Time Pony had a week off. I felt like she could use the rest, but honestly, leaned up against the side of the couch, School Time Pony looked a bit sad. Like she wasn’t doing her job and so forth. Over the week, that impression of being forlorn grew a bit. Instead of big blue eyes, they seemed more like big sad eyes.

Even in the “shotgun seat” of my car, School Time Pony still seemed a bit depressed. Maybe it’s the year of hard living that makes her head kind of slouch a bit, I’m not sure. When we got to class, however, and I tried to put her in her Very Important Spot on my desk, she was straight up stuck to my clothes. With the help of my students, we extricated School Time Pony pretty quickly, and without harm…but it made a pretty important point. Even the kids were kind of like, “So…Pony missed coming to work with you, huh?”

I think that’s true in an odd kind of way. I had a pretty excellent first day back at school, and if School Time Pony were an actual living being, I could see wanting to continue on past the end of the term. I was waxing poetic about that kind of thing in yesterday’s post in fact, and how the whole cycle of school is about continuous closure, and “moving on.”

In a couple of weeks, the current unit will end, and then we will push through another, much smaller one. We will be finishing with Hamlet, and final papers…but the end game is upon us, as it were. That’s a good thing, of course, but like everything that has an ending approaching, there are always complicated viewpoints attached. My students are now rushing to get old (very old) assignments in, to bring grades up before the last report cards happen. Students are also spending more time around the classroom, and after school…sort of cementing the relationships that they have formed with each other, and with me. There’s a feeling of excitement, but also a feeling that things are finite, that change is upon us.

I figured School Time Pony was looking forward to retiring, and sitting next to Zebra Pony, generally being relaxed and happy. It turns out that School Time Pony seems Very Serious about every last minute of the semester, as you can tell from the artwork. Also, I felt like School Time Pony probably felt a bit left out of the “running to the left” group panel from yesterday, and wanted a post to herself.