It dawned on me that a whole lot of the reason that I was spending more time than needed on this unnamed desert planet was that I wanted to draw Vulcan. Except…that’s NOT a strange new world, and you can’t have any of the epic action sequences that we’ve had…with desert warriors and sky skiffs. Vulcan dissidents somewhere between Romulus and Earth, though…they fit the bill nicely. They can be violent and generally punchy, without the limitations of being one of Earth closest neighbors, and established pacifists.

I have to agree with Cap’s frustration with this Vulcanoid Space Princess. I get it, by now, Cap has wrecked a whole lot of stuff. At least three skyships, and at least seven of those armored warriors on the ground, because that’s what we have seen in panel. If some rando showed up on my planet and just started wrecking stuff, at the Silver Age Level of wrecking things, I’d be pretty tired of it, pretty fast.

Cap has a pretty fair point though…in the first day of this “subplot”, one of those armored Vulcanoid warriors just attacked for NO REASON. Well, no reason except for me wanting to draw it. Spock and Cap had just crashed a shuttlecraft, presumably because it was shot by some kind of lasers. It’s possible that Cap was driving, and that crashed it. Either way…they didn’t start it.

This is how vacation posts go, True Believers. Rambly, and weird. At least it isn’t politics, right?

The title of the post comes from a really good Amonkhet card (another thing that has kept us on the desert planet) called “Compulsory Rest.” It costs two mana to play, and you put it on a creature (it’s an enchantment). The enchanted creature can’t attack or block and the card also says “Enchanted creature has “2, Sacrifice this creature: You gain 2 life.” So if the other player wants to just remove it from play, they can, for a decent benefit to them.

A fantastic card that just plain stops much, much more effective creatures from being able to wreck your stuff up. You can see how it became the title here…Cap is being asked to take a Compulsory Rest.

I drew this as two separate pages, to put together into the panel design later. Originally, Cap and her sarcasm were intended to be a much smaller, inset panel, and the whole thing was going to be more vertically laid out. I didn’t like that at all, so we got the large layout horizontal composition that we have now. The larger page size gave me much greater detail for the panels, obviously. 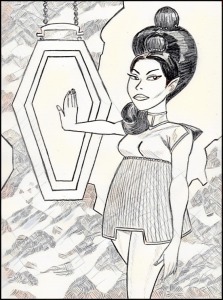 The Panel One art, of the Vulcanoid Space Princess.

For the record, I do not like Empire Waists on dresses, but when dealing with Vulcans, do as the Vulcans do. Probably more comfortable in a desert environment than something more fitted.

Cap’s shirt provided a large number of challenges. That torn, large part in front of her is the torn turtleneck section of her “Cage” style shirt, worn the last few days. Obviously, the jacket is long gone. The problem was…after I decided to tear that large piece of fabric, the collar…she needed the shirt to stay on somehow. That’s why we have the more traditional black collar underneath. Being honest…it seems sensible that there might be two layers of collar there, with the turtleneck being more like an accessory, something clipped on or around.

Seriously, the Comics Code is vital here. Cap just plowed through a mess of razor wielding alien bad @#$ guys, and probably flew through those sky skiffs. Undoubtedtly being shot by numerous lasers…the nigh invulnerable don’t dodge much. Except…Cap is nigh invulnerable. Her shirt is Velour.

Velour is a soft fabric. Easily shredded. Comics Code, please? That actually determined a lot of the composition, which is why I’m talking about it.

I wanted her posture to be sort of “battle ready,” with an air of “I have had about enough of all of these shenanigans.” More of an annoyed tired, than an actual tired. I’m very happy with how it came out.

Cap gets a Compulsory Rest…but I don’t! Back to the drawing board, True Believers!