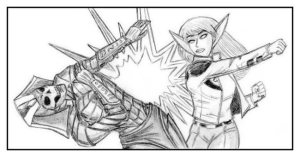 She put a decent amount into that smack, to get through all the layers of lazotep.

As the week goes on, I’m handling more problems than accruing them. that’s a very good thing, and entirely what both the art (and this post) are about.

Ahead of schedule, my grades are completed and submitted. They have been double checked by my co teacher, and everything seems good to go. That’s an excellent thing.

Also…I finally talked to the Magic: The Gathering Club on Wednesday. Things are more or less set in order, and the members pretty much understood that things got way out of hand on Friday. It was the sort of “teachable moment” about sportsmanship that I really don’t expect to be teaching myself, because often, I’m not the best example. Taking the time to cool off, and talk about it with intelligence and maturity was definitely the best of all possible ways to go. I’m happy with the outcome.

That’s a large number of things worked out this week, which I can’t complain about. I have avoided entanglements with the Edu-Lords, dodged the Union President, and generally stayed on point with just teaching English.

In the recent Amonkhet storyline (of Magic), the Elder Dragon Bad Guy (Nicol Bolas) created a system of “eternalization.” The idea was pretty simple, and by the end of the storyline, he had an army of these “eternals” at his disposal, to take from plane to plan, and do basic “bad guy” stuff.

Mostly blue, black or red Zombies (“eternalized” creatures) are referred to as Eternals. This is the conclusion of those who pass the trials and are slain by Hazoret (one of the god cards of Amonkhet). They turn into Bolas’ lethal undead fighting force that has far transcended their mortal capabilities. They are embalmed in layers of lazotep, a valuable blue mineral, that preserves their lifeforce as well as their deeds in life.

Unlike regular zombies, who are pretty basic and unskilled, the Eternals are elite soldiers with all the skill and prowess of living soldiers, but none of the disadvantages that arise in living beings…such as emotions, hesitation, or disloyalty. Bolas personally crafted all of Amonkhet (an entire dimensional plane) just to create just such an army. Being generally 4 power and 4 toughness, the Eternals are really, really strong.

To set the tone, a soldier is generally one power and one toughness. A bear is two and two. A Dragon or an Angel… those are 4/4 territory. So…pretty strong, per unit of eternal mass. Pretty good army.

That’s why Cap is hauling off here. That “Proven Combatant” (an actual card name that can be Eternalized) is at least as strong and tough as a basic dragon. That’s going to take a mega-punch, even if you have Silver Age powers.

I drew this because a lot of my students heavily play the Amonkhet set, having come out in the last year…and as a result, I deal with a lot of the Eternals in play on a day to day basis. The generic but strongly threatening status of the Eternals, with their Lazotep coated bodies, seemed like a good, formidable generic foe to depict.

Plus…in a cathartic sense, it was time for Cap to straight up punch something. something from a heavy metal album cover. The Eternalized Proven Combatant fit the bill quite nicely.