Adventure Is Her Reward! 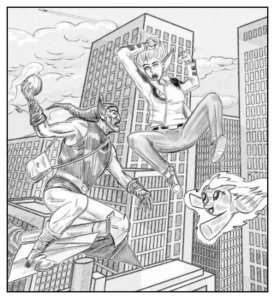 The title of this post come from the theme song of the 1960’s animated Spider-Man series, which seemed to fit the material. I mean, Cap is descending from some kind of massive super jump, or generally poor flying, about to drop an indestructible elbow on the noggin of that Goblin Formula guy. Silver Age Super Strength will be behind that elbow, True Believers. She can throw stuff into ORBIT, and is straight up using an evil WWE move on that Bad Guy.

And what’s HE bringing to the table? An exploding pumpkin bomb? I don’t think so, Goblin.

In fact, it seems pretty unfair since we know that Pony Torch is clearly going to set him on fire as well. That’s what Pony Torch DOES. You kind of have to wonder what prompted him to get on that glider, put on his man purse, and fly out today.

For that matter, what prompted me to draw this? That’s a good question. Thanks for asking about it.

I downloaded the infinite runner style game “Ultimate Spider-Man” to my tablet. It’s pretty good…but I’m not sure how long it will stay on my tablet. It takes up a LOT of space. In the first chapter of the storyline, you have to take on a bunch of Alternate Reality Green Goblins. I’ve already dealt with a Gold Goblin, and a Gray Goblin, and am currently stuck dealing with a Red Goblin called Menace. It seemed like a good match, since a few of the red decks assembled by the boys in Magic Club have been beating me up, and they have some pretty serious goblins as well.

So…despite being a black and white piece he seems to be a Red Goblin. Cap is dropping the hurt on him so hard because it’s cathartic. Maybe I can’t deal with the Red Goblins in my gaming environments, but she certainly can.

Today will be a long day. Long. An Infinite Runner, if you will.

It begins from start with a Senior Meeting, where our principal will attempt to motivate the Senior to bring their grades up in a Final Push. That’s going to be pretty tough, since the Dark Lord isn’t all that great at motivating anyone to do anything. In addition…there are 235 out of 340 that currently have at least one Failing Grade, and that means a major portion of those students are in danger of not graduating.

I’ve got to be honest here: he’s protecting the graduation rate numbers more than anything else. He’s going into a WASC year with a massive attendance problem, a growing drug problem, failure to test all of the students that need to be tested for various metrics, and a declining graduation rate. In all of the ways that you can empirically measure a principals’ leadership, he is not doing that great.

That’s my first half hour. Then I need to drive my students through the second and third paragraphs of their final research paper, and THEN I get to lunch. A quick lunch meeting, followed by a shortened Magic: The Gathering Club meeting for the rest of lunch. Conference period which will have me catching up on paperwork and planning, including planning the last unit of lessons. That will get me into the last two periods of the day, where I will guide those two classes through the same research paper.

At that point, the day is over, but I am one of the few teachers signed up to supervise Movie Night. I believe that the film is “Star Wars: Rogue One,” which I have been willfully avoiding seeing since it came out. I feel like I already know everything that I need to know about Death Star plans, you know? That lasts until around 6 PM.

Kind of typical for a teacher that’s involved in things though. That’s why the Spider-Man lyrics stood out for me here. They have a whole lot to do with how I feel, in terms of the Edu-Lords, the Dark Lord himself, and the job in general.

“Wealth and fame, he’s ignored,
Action is his reward!”

One thought on “Adventure Is Her Reward!”