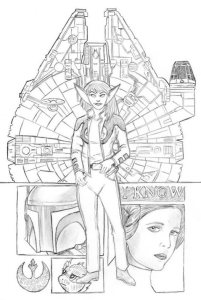 Feeling good about getting my car back.

I returned home on Saturday, after picking up my car…finally. She runs great, which is fantastic. Necessary in fact, considering how much time and money has been poured into major servicing this year alone. With it safely downstairs, I not only drew Saturday’s post, which was very much about the sticker shock related to the needed repairs, but took some serious time doing the artwork above.

I felt like we needed to have a Mandalorian Bounty Hunter in it, since without a doubt my Student Loan Officers will be hiring some of them soon enough. I’m not in default, heck…I’m not even behind. However, with the massive finance suck that this last hit came down to, I’ll have to talk to those nice people, or I WILL get behind, and they don’t really wait too long before hiring the Bounty Hunters.

We haven’t seen Skrull Space Princess in FOREVER, probably because I’ve been pretty sensitive about Carrie Fisher’s death. Enough so that I just drew her as regular Princess Leia, without the added Skrull features. I just…couldn’t do it, and the likeness came out so good, I didn’t want to mar it. Thankfully, Skrulls are shapeshifters, so she can look however she wants. Apparently, (if the rumor mill can be trusted) the Captain Marvel movie will have Skrulls as bad guys, so that will be an interesting thing. Skrull Space Princess typically shows up in the strip when I have car problems, generally to complain about the Luna Star Dancer and its somewhat unreliable functioning. As a result, it seemed like I should incorporate her here.

We have “I Know” (hand lettered). That’s important because it is how Han Solo tells Leia that he loves her, but more importantly, expresses how I feel about my car, and Cap about her spaceship. I hate hand lettering, but it seemed like the way to go here.

Of course, we have Pony Torch looking concerned. In fact, looking up, Brady Bunch style at that Bounty Hunter, with some real skepticism. As usual, the ponies represent my inner thoughts and feelings, and Pony Torch has some surprisingly responsible financial worries here. Go figure. I’ll get paid again soon enough, so it’s not nightmarishly tight.

Drawing a spaceship like the Millennium Falcon is tough. There are tons of little panels and doo-dads on it, that you have to pay attention to, you have to interpret for yourself. Even with references (which I clearly had), it’s a tough job to do. I’m very happy with the result, and the piece over all. I feel like it does everything I needed to with a tone piece, and that the different characters each convey a facet of feelings or emotional content.

One thought on “Sunday Bonus Post: Return Of The Lunar Star Dancer.”