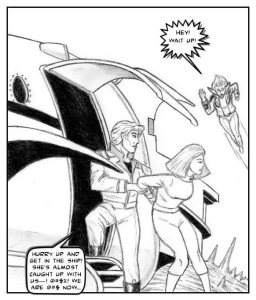 It’s bad enough when you kind of ditch your friend at the mall, or at Disneyland. That’s pretty uncool. Rick Gordon here is trying to ditch Cap in Deep Space. And let’s be totally fair here…the entire reason that there’s a spaceship to get into is that Cap laid out that Daxamite a couple of strips back, and took his keys.

After watching about a fifth of the “Defenders of the Earth” cartoon series, I have come to the conclusion that Rick Gordon is kind of a jerk.

I’m not going to say that Cap’s personality isn’t a contributing factor here. Between needing to be picked up from Gazorpazorp because of the Rye Incident, all the way to yesterday’s strip, she hasn’t exactly been the kind of Alien American that you want your parents to know that you are hanging around with. I’m just pointing out that the High Road might not be Rick Gordon’s best choice here.

I suppose LJ is inside, warming up the spaceship. I really didn’t think it out.

The real point here was more practice at flying (in this case, in the background, not the foreground), more figure drawing in “action poses,” and the cool, retro spaceship. I felt like the Daxamite should have been rolling about in a retro futuristic ride, given his retro futuristic clothes. I’m also about ready to be done with the Defenders of the Earth, and move onto other things.

A part of me DID want to have one more day of “space action.” We will see.

Thematically, I’m actually starting to think about going back to school, and it shows. My school is fond of the “work is a family” thesis of “togetherness” under our new principal. My personality, such as it is, often puts me very much on the outside of such things. That is what it is, but sometimes it is pretty annoying.

Of the few teachers that I AM close with, they tend to also be “outsiders” from the “work family.” Most often, we refer to it as not being one of the “cool kids.” I’ve been speaking to a few of those friends (there only ARE a few) catching up before we go back. Definitely, they feel the lack of “cool kid” status more acutely than I do. Apparently there were “social engagements” planned via social media, and none of our little band was invited.

To be fair, that’s yet another good reason in my utility belt for not using social media.

I don’t really like my friends feeling left out though. Just because we teach in a High School, it doesn’t mean we have to act like we are still attending High School.

That’s really a part of what makes Rick Gordon and the Defenders of the Earth work here for me, narratively. Arguably, those are some of Cap’s High School friends, and even though everyone is an adult right now…the Defenders still seem cliquish. If you asked them, they would say that there are no cliques, and that everyone is part of the team. I hear that a lot from the Suits at school.

Despite all of that…I’m starting to look forward to going back to school. I miss a bunch of the students, and I miss being busy.

I do NOT miss my commute, so at least there’s about two more weeks off.