Kindness Has Absolutely No Cost. 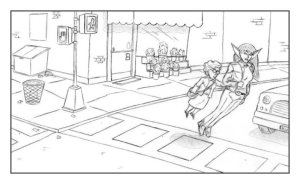 Pretty much says it all.

During the summer, I watch the news too much.

I set the iPad next to me, and listen to the news while I draw. I usually do that, but during the summer, I have all day. Under normal circumstances, I am amazed at what has happened while I was at a school day. During the summer, listening to a ten minute news brief and then pressing “refresh” on the iPad browser brings all kinds of other craziness to the fore. It’s easy to get discouraged about the state of the world.

It always brings me back to Superman.

Superman is fictional, I know. He’s also a kind of apocryphal example of how we should comport ourselves, a kind of modern myth or morality tale. He has the capacity to do all kinds of things, many of them not so great, but he chooses to do the better thing, whenever he can. He does that because it’s the right thing to do, and that has its own merit.

Maybe it’s feeding squirrels near you, or hummingbirds. Getting a cat out of a tree, or giving a kid a comic book. Helping an old lady across the street, like Cap in the artwork. We all add small amounts of value to the world, just by being decent people. Most of us anyway.

My friend, last night, spoke about adding “small goods” to the world. Being the kind of person that isn’t a big shot, isn’t concerned with the “big picture,” but instead actively works at improving the basic quality around them. Just a person who helps when they can. He asserted that there are literally an unknown number of those people, and that is where we can find the real value in the human experience.

That’s what I chose to draw about, obviously. Using our powers for the small things, for increasing the basic quality around us. Superman used to do that a whole lot, and I can’t imagine he was wrong about it.