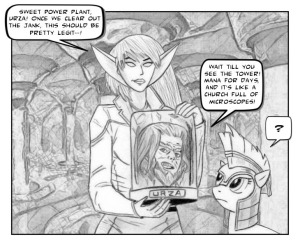 Cap is hanging out with Urza again! That can’t go well…

The fiasco involving the first report card is over. Ultimately, the problem was that the software to generate student report cards had been massively modified, and no one really informed any teachers. It was a district wide problem, but a few teachers and myself figured it out together early Wednesday evening, so despite a fair amount of data entry needing to happen, everything came together appropriately.

My co-teacher and I also spent Thursday ensuring that every student on our roster could successfully sign in to the computers and the classroom management software. That was less of a chore than I thought it would be, honestly. It effectively renders my classroom paperless once again, removing the less than excellent phenomenon of students randomly walking up to me and attempting to just put late assignments into my hands. That’s ultimately a Bad Plan, because it is all too easy for me to put it down someplace random, and then lose it.

Again…we are done with all that.

Instead, we are launching into a brief unit of a couple of weeks involving actually short literature, of which you would think there would be more. I really attempt to get as much good literature into the schedule of any year, but with standardized testing and other almost random influences and interference, it is sometimes pretty hard to do so. I’m looking forward to delving into some quality work, if only for a little while.

Despite these relatively positive moves, I’m still suffering a bit on motivation. I’m most looking forward to playing Magic at lunch with my now much smaller club, for which I have put together a truly evil new deck. It is a deck archetype based upon the “Urza lands,” more popularly called the “Tron lands.” Modern Tron, or Urzatron, is a usually a control deck that runs off of the three “Urza” lands (Urza’s Mine, Urza’s Power Plant and Urza’s Tower) in order to make large amounts of mana (which pays for your other cards). There are a number of different kinds of such decks in the format; you can use large amounts of mana for any kind of effect in the game.

I don’t usually play a control format though. I usually play Jund (which is hyper efficient and very aggressive) or Burn (which just tries to get rid of opponents fast, with direct damage). Urzatronic Burn is easy enough to put together, even on a budget. With land tutors and mana doublers, it can get out of hand very quickly.

As a result, I am now the proud owner of a red/green (Gruul) Urzatronic Burn Deck. I’ll be trying it out today at lunch, which seems pretty exciting to me. It’s one of the high points of the day, really.

I’m so excited by the topic that yes, we got today’s art, but I also did a mock up of the art as one of the Urza lands, to use as a proxy. Say, for autographs at big Magic events like Pro Tour. Let’s check that out: 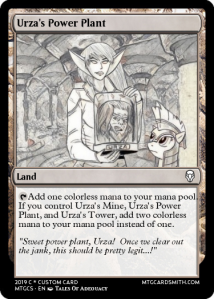 Soon to be made into a proxy play set of Urza’s Power Plants! For your health!

As always, Gideon looks pretty concerned. Gideon seems like a pretty serious, pretty on the straight and narrow path kind of pony. Since the ponies reflect my emotional state, I think that Gideon’s almost constant state of concern or confusion says something strong about the level of organization around me, and how much I’m having trouble accepting that low level of competence.

Schools, and school systems, should just do better.

At least I get to try out the Power Plant, Mine, and Tower today with Urza and Gideon. Gotta focus on the good stuff, True Believers!