Great Comics That Never Happened: All Against The Crown Thief! (Bant Superfriends) 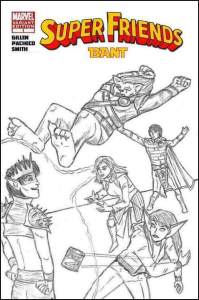 Cap seems very unhappy to have been given a food token.

So, yeah…it seems like I’m really enjoying doing sketch cover homages this week, with the characters of Magic: The Gathering as if they were drawn by Jack Kirby. Go figure.

I do have a LOT of these blank sketch covers, and it is a major edit to put the “Superfriends: BANT” logo on them. Weirdly, it feels worth it, especially being at Platinum Tier 2 now. I worked it out…that means I’m at about the top forty percent of players digitally, which is just fine. It would be a major grind to attempt to actually crack the diamond tier this season, so we will just have to see what happens.

The bad guy there is Oko, Thief Of Crowns, who as banned a week and a half ago. Again…I made two decks in response to him, and then combined them into Bant Superfriends, so it seemed like the original line up should be fighting him. I guess Ajani is planning to drop kick him, with his foot claws? Kasmina can do two things, generate a force field and create wizards from scratch…I guess she’s trying to trap him? She wasn’t ever the most effective against Oko, but did have value. Jace, who has mind powers, seems kind of put upon in the back. I guess since he’s supposed to be a “master strategist and planner,” all of this random violence kind of annoys him. Maybe he’s using his mind powers. Who knows?

Combined with yesterday, I guess this is like a two part origin story, with absolutely no details about the origin whatsoever. That feels right.

I wanted Cap to be throwing a food item as hard as she could, but also wanted it to be an “artifact,” like the food tokens in the game. I settled on a can of peas, because A) no one likes canned peas, and B) it seemed fun to draw. So there is that.

Let’s look at the pencils, since I’ve been doing that this week: 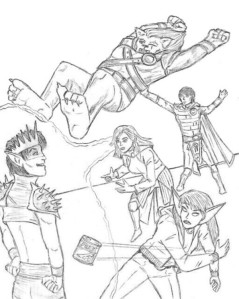 Obviously, the team is bigger now, since we all saw the first Bant Superfriends cover. I’m debating doing a multipanel gag this week (that was actually the initial plan), but I’ve really been having too much fun with these. I think a set of Magic cards in the Kirby style would be super fun, although wildly off brand.