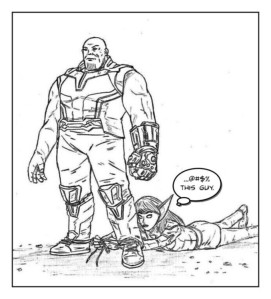 If you want to connect yesterday’s post to this one, and say that Thanos used his Infinity Gauntlet to move the moon and that planet around, you can.  Maybe he teamed up with that Cosmic Being, the guy with the insanely giant thumb.  It wasn’t intended that way, but while I was drawing this, someone suggested the connection.

I kind of just shrugged my shoulders and made a sound.  Sometimes people are looking for more plot than I’m thinking about.  It kind of works, though, I guess.

I’ve been home, and bored, and thinking about cosmic menaces that threaten huge amount of the population, so Thanos just kind of seemed like a logical entry here.  I didn’t want to do something heavy, something downbeat, so this happened.  Cap could probably throw down pretty well with Thanos if he didn’t have the Infinity Gauntlet, honestly.  Sure, he’s an Eternal from Titan, but that pretty much just gives him a Generic Set of Alien Super Powers from the Silver Age, much like Cap.

The Infinity Gauntlet, as we all know, is a game changer.  In fact, any one stone is.

Everything we are doing now is to “flatten the curve” or slow the progress of a population threatening crisis.  I might have been thinking of that when I drew this, because tying Thanos’ shoelaces together is going to do that, for a hot second.

For a hot, humiliating second.

Think about it…you are a cosmic scale bad guy wielding universe shattering power from the beginning of the universe….and you face plant because some jerk tied your shoelaces together.  That’s a bad moment, that makes you question everything, especially your choice of footwear.

Obviously (or maybe not obviously) Thanos didn’t have laces in his footwear on screen.  That was one of the bigger challenges here.  Figuring out how to add shoelaces, and also how to draw tying them together.  The whole thing was an interesting exercise.

I chose to go with the film costuming for Thanos because honestly, that’s what most people recognize, and I wanted the gag to land.  His film ensemble has a whole lot of little doo-dads and extra bits of kibble on it that were unexpected until I sat down to draw it.  If we see him again, I don’t know that I’ll use this selection from his wardrobe.

Also….knock, knock…I know you are out there, Rob Liefeld!  Yeah, I’m talking to you.  For this gag to work, I needed to draw both feet and hands.  People needed different faces.  No one could be just randomly gritting their teeth and shouting.  I could have left Cap’s feet completely out of frame, but I wanted the perspective to work.  See that?  I could have done it, but didn’t.

I’m definitely not sure what I’m going to draw for tomorrow, so if you are having some idea of unity between yesterday’s post and today, in terms of “plot,” I can’t promise anything.  I probably will draw and post something tomorrow, because drawing provides me a thing to do that is intellectually stimulating in this time of Social Distancing and Remote Learning.

Especially on the weekends.  It’s never clearer how much the city of Los Angeles is shut down than on these weekends.  I’m not a person that does a whole lot…I don’t go to concerts, I see a film once in a while, clubs are not my thing at all.  Now though, the inability to go and have dinner with a friend, or get a happy hour…take the dog to an obedience class…it’s amazing how that changes things.

Anyway…I’m going to get back to the drawing board at some point today.  Whatever you do, add value to your day somehow, and be excellent to each other.